This is not just true of "religious law":

Only greatly insolent people establish a religious law which is to be taken for granted by others, which should be accepted by everyone on faith, without any discussion or doubts.

Something I personally have to think more about…you?

We have nearly limitless potential, yet too few ever try to reach it. Why? The answer lies in this: We can do anything, but we can’t do everything. Many people let everyone around them decide their agenda in life. As a result, they never really dedicate themselves to their purpose in life. They become a jack-of-all-trades, master of none—rather than a jack-of-few- trades, focused on one.

Speaking about something I need to think about, as should all "long term" Christians:

This temptation comes later. It is addressed to those who have already admitted the claim in principle and are even making some sort of effort to meet it. Our temptation is to look eagerly for the minimum that will be accepted. We are in fact very like honest but reluctant taxpayers. We approve of an income tax in principle. We make our returns truthfully. But we dread a rise in the tax. We are very careful to pay no more than is necessary. And we hope—we very ardently hope—that after we have paid it there will still be enough left to live on.

Ask yourself the following first thing in the morning:

This quote comes to mind at work today…

Poor planning on your part does not necessitate an emergency on mine.

A page on GoodReads attributes it to Bob Carter.

Luckily, that work feeling today is not constant. 🙂 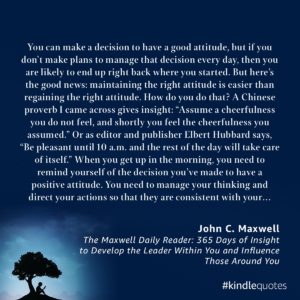 How do you do that? A Chinese proverb I came across gives insight: “Assume a cheerfulness you do not feel, and shortly you feel the cheerfulness you assumed.” Or as editor and publisher Elbert Hubbard says, “Be pleasant until 10 a.m. and the rest of the day will take care of itself.” When you get up in the morning, you need to remind yourself of the decision you’ve made to have a positive attitude. You need to manage your thinking and direct your actions so that they are consistent with your decision.