If you’ve read much of this blog, you realize I am untrusting and skeptical of much of the COVID-19 narrative. However, that doesn’t mean that I can be credulous about counter-claims, just because they confirm my take.

For instance, Nassim Nicholas Taleb responds to the “fact” that the mortality rates for the vaccinated are higher than the unvaccinated:

It’s a statical artifact and when is it, you know, misleading? When the bracket is very large and you don’t have homogeneous populations…and you have uneven, the solution, of the population, between the two samples. 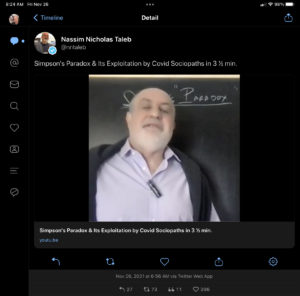 (I hope I transcribed that correctly.)

Basically, with COVID-19, if the vaccinated population is heavy on folks who die at a much higher rate (the elderly) and the unvaccinated is heavy on those who do not (the young), then Simpson’s “Paradox” kicks in. Overall, the mortality rate for the vaccinated can seem higher, even though at smaller brackets (e.g. 10 year age bands) it is the reverse.

Now, I haven’t seen the underlying data, so I cannot confirm what Taleb says, other than his statistical logic is sound…and that I have found him to be a trustworthy fellow who goes where the mathematics takes him.

Oh, and I have personally seen something similar in some data analysis I had to do months back. In certain locations, it appeared a minority population was being underserved in vaccination statistics, but it was less so when you took into account age. (That minority population in those areas was younger than the non-minority one, there was a huge push to vaccinate the elderly, and vaccinations weren’t even open to some of the younger age brackets.)

Remember folks, lies, damn lies, and statistics. Unless, of course, you use statistics carefully and honestly.

Simpson's paradox. Check out the rates among each age group, and then check out the aggregate rate. pic.twitter.com/qIyYi7PWcJ

This is a great video, not only because of delving into this:

Only by abandoning math’s connection to realty, could we discover reality’s true nature.

But, because it discusses some really intriguing history (e.g. math duels, with you job on the line) and how folks went about certain problems totally differently than we do today (e.g. using geometry to solve quadratic equations, versus symbols).

P.S. BTW, the “job on the line” is why folks also hid their solutions…

Cross posted on my Math.Promo blog.

Do you have five minutes to see if mathematics is an argument for God?:

P.S. You can read a paper William Lane Craig refers to in the video, “The Unreasonable Effectiveness of Mathematics in the Natural Sciences,” here.

Remember, there are lies, damn lies, and statistics.

The rate of infection reached an average of about 45 cases per 100,000 students by late September in school districts with mask mandates.

Virus spread was 62% higher in school districts with no mask rules, where the infection rate averaged 73 cases per 100,000 by late September.

Unlike my hypothetical accident situation, this difference is probably meaningful…but even the 62% higher infection rate comes out to 0.073% (as in not even one tenth of one percent).

No policy has only one effect, and the benefits have to be measured against the costs.

Our children have paid too much during this pandemic because of adults’ single-factor thinking.